Siena Itlay: Lunch in the Rain

- where do I start?  The day dawned cool and gray and we drove to from Soriano with anticipation, having never been there before.  As we parked outside the city walls and began the walk towards the hillside fortress of 's walls, a light drizzle began to fall and we instinctively picked up our pace.  The winding old city passageways were confusing at first but once we relaxed and began to get our bearings it slowly began to make sense and we discovered that we were naturally winding our way towards the Piazzo Del Campo.
As we walked through the narrow winding streets I noticed the lovely colorful Pashima scarves that men and women were wearing.  I spied the entrance to a brightly lit shop displaying a rainbow of beautiful scarves and quickly ducked inside.  I purchased several of the soft wool pashimas - some for me and others for friends and family, then received a quick lesson from the sales clerk in the art of wearing the pashima.   With her help I looped a colorful pink scarf around my neck and stepped back out into the light rain, feeling instantly warmer and happy inside.  Tom, of course, was not as interested in colorful scarves and had stayed outside the shop to snap pictures of the streetscape.  He captured a lovely photo that will always represent to me - the bright shop entrances casting their light on the wet cobblestones and people moving through the streets with their colorful umbrellas, going about their life and business in a wonderfully relaxed way.

We found a cafe with outdoor seating at the edge of the Piazzo Del Campo and settled down under the awnings to watch passers-by and enjoy the leisurely pace of life in .  It was lunchtime and we were definitely in vacation mode by now - a carafe of red wine with our pasta would be a wonderful way to enjoy a relaxing lunch!  There is no need to ask for a particular label or variety - red or white is all you need ask for, as any of the wines are superb and delicious.

We snuggled together, enjoyed the warming red wine, listened to soft raindrops on the awning above and watched the local school children dance in the rain on the Piazzo.  We grinned at each other - I was getting used to this lifestyle!  It would be hard to go back home to the lunch hour spent at my desk with emails and voicemails waiting to be returned.  But for today I was not going to think about that - I was going to enjoy the moment with my husband in a beautiful old city, a carafe of red wine and a plate of mushroom ravioli in front of us with a light rain providing soft background noise.  Life is beautiful! 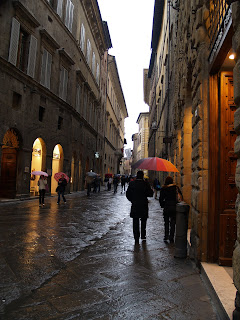 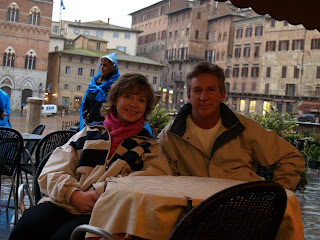 Travel Tip:  Take time to enjoy the liesurely pace of life where you are.  And don't count the glasses of wine or your age...
Posted by Sandy at 11:35 AM No comments:

July 4th across the nation

"I know not what course others may take; but as for me, give me liberty, or give me death!"
~ Patrick Henry, speech to the Second Virginia Convention

Travel Tip:  Always join in the local celebrations wherever you happen to be.  This is the true way to experience the life of those in other places!
Posted by Sandy at 10:42 AM No comments: