But those who hope in the LORD will renew their strength. They will soar on wings like eagles; they will run and not grow weary, they will walk and not be faint. ~ Isaiah 40:31, NIV

I saw the first bald eagles of the season the day after Thanksgiving.  The pair was standing in a field, feasting on a prairie dog, oblivious to the noise of the cars flying past them on the nearby road.  I slowed as I rounded a corner in the road, the large birds catching my attention  and when I realized what they were, I quickly pulled off to the side and turned on my emergency flashers to caution the cars still racing past me.  I watched the regal birds as they devoured their prey, performing a slow and timeless ritual of feasting on the helpless rodent they had no doubt caught and killed just moments before I came upon them.   I noticed their rhythm - as one would lower its head to eat, the other would stand erect, surveying the surroundings for signs of trouble, taking turns accordingly as they devoured the meal.  Without warning, in tandem, they flapped their wings and raised to the sky, soaring up and away from the sight of their kill.  The meal was over, they were moving on and I watched them, feeling a slight twinge of envy as they raised effortlessly over the field, soaring higher and higher into the sky and circling away from sight.

I stared around me for a moment, surprised that no other cars had even slowed, much less pulled over or stopped, to view this wonderful spectacle.  I suspect that the drivers were all moving so quickly, preoccupied with whatever was on their minds, they did not even notice the large birds in the field.  I pulled back into the traffic, and headed on towards home.  As I rounded the next bend, I saw the sign for a reservoir and bird sanctuary ahead and decided to pull in and take a walk - it was a nice day and the sight of the eagles had whet my appetite for viewing more birds of prey.  I found a parking spot, pulled my iPod out of my purse, plugged in the headset and turned on the music playlist, and began my walk along the path towards the lake.

I walked the half mile from the parking lot to the lake alone, then paused at the shore, watching the wood ducks and the Canadian geese as they swam effortlessly through the still waters of the reservoir, creating small ripples on the smooth lake as they moved.  After a few moments of watching and waiting, I decided to continue walking and turned to head back towards the path.  As I walked the music on my iPod changed, and the Brandon Heath song, "Wait and See", came on.  The song lyrics started soft and slow and I recognized the song, and thought briefly about changing it.  The music was a slower pace and I felt energized being outdoors - I wanted something with a faster beat to keep my feet moving quickly.  I was preparing to glance down and begin the process of changing the selection when something above me caught my eye, and I paused to look up into the blue sky.  There they were - the pair of bald eagles, soaring and circling above my head.


I stopped in wonder, peering straight above me and watching the beautiful pair dip and soar, gliding along with the wind currents and moving effortlessly several feet above my head.  "He's not finished with me yet," came the words in my iPod headset, as Brandon Heath continued to croon.  "Still wondering why I'm here, still wrestling with my fear, but OH, he's up to something..."   The words of the song and the soaring eagles above my head gave me a pause and I suddenly heard the message - "He's not finished with me yet... He's not finished with me yet."  New hope sprang into my heart - God has a plan, and it's not over yet.   The promise of Isaiah 40:31 came instantly into my mind - "But those who hope in the LORD will renew their strength. They will soar on wings like eagles; they will run and not grow weary, they will walk and not be faint."

As the lyrics of the song rang in my ears and the words of the Prophet Isaiah populated my mind, I watched the eagles soar effortlessly above the ground, dipping, gliding and moving with the currents of the wind, and I felt and knew that God was there.   The eagles were a sign of encouragement, reminding me to keep my hope in the Lord and soar on wings like eagles, as I allow him to finish the work that He has started in me.  I watched the birds as they continued their mesmerizing dance, then slowly, as the song wound down and came to an end in my headset, the birds flapped their mighty wings, banked to the west, and moved away from me.  I watched until they were out of sight.

How grateful I am that I noticed the pair of bald eagles in that field and that I took the time to stop and watch them, opening myself to the message the sight ultimately delivered to me. I wondered, how many times has God tapped on my shoulder with the intention of delivering a message, but I've been to busy to stop and listen?  Feeling a renewed sense of enthusiasm and a lighter step in my walk, I returned to the car and drove home as the lyrics of the song continued to play in my mind, reminding me that, "He's not finished with me yet." 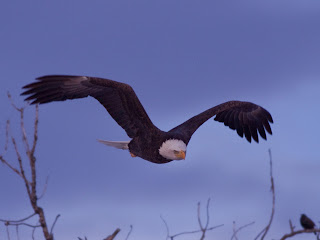