Seventy nine degree weather in December.  A calm and tranquil blue ocean, lapping gently against the sandy shoreline.  Gray whales spouting in the distance, as they migrate from their feeding grounds in Alaska to warmer waters off the shores of Cabo and dolphins playing and leaping in the wake of sailboats and small fishing vessels, frolicking in the water for no apparent reason at all.  Seals splash in the waves just off shore, catching their meals and riding the surf as funny little sandpipers run along the beach, moving as one large group, dashing away as the surf rolls in and then following the retreating waves along the shiny, wet sand, bobbing along as they harvest the food particles washed up on shore.  The little birds move constantly, to and fro, heads bobbing up and down as they pick at the sand and yet I find the spectacle strangely calming and I breathe deeply, inhaling the delicious scents of the ocean air.  Three perfect days in , and I could spend all of them right here, on the beach, inhaling the scents and feeling more and more alive by the moment.

Tom and I had never visited and decided, on a whim, to go the week before Christmas.  It was spectacular, and has quickly rivaled as my favorite coastal town.  The sunsets on the beach were the reddest, most glorious sunsets I have ever seen, and the sunrise was equally impressive each morning.  But it wasn't just the beauty of the area that captivated us, it was also the people.  felt friendly, and real.  The first evening we were there, strolling along in the quaint downtown area, we noticed a line of old fashioned trolley cars decorated for Christmas and filled with merry families, all cuddled in blankets and sipping hot cocoa, ready for their ride.  We stopped in amusement to watch the spectacle as car after car was loaded with guests by young attendants dressed as elves.  We asked one of the "elves" about the event, and she shared that this was the Santa Barbara Parade of Lights - the trolley cars took their passengers on tours through the city, admiring lights on homes in the neighborhoods.  "We have been booked solid since October," she said.  "It's a big deal around here!".  We inquired if there might be any openings and as luck would have it, there were two no-shows on one of the trolleys, so we quickly paid our fee and hopped aboard.  What a treat!  Families were standing in their front yards, children dressed in their pajamas, and waving and shouting "Merry Christmas", as the trolley cars rolled past, blaring Christmas music all the while.  We shouted and waved back and the ride continued through the neighborhoods, each decorated more spectacularly than the other.  When the evening ended, I felt so light and happy.  It was such a fun time to be with local families, waving and calling Christmas greetings to strangers as they stood in their yards and open doorways, and everyone smiling and enjoying the season.


Three days was perfect for us - three days of blissful walks on the beach, bicycling along the city paths, picnicking, resting, laughing, relaxing, sipping local wines and eating some of the best food I have ever had.  Visit , my friends.  And before you do, call me.  I'll help you pick out your hotels, give you insight into my favorite restaurants and share the locations of some secret beaches.  And while you are there, make sure to sit and watch the sandpipers.  Their lively movements will calm your weary soul. 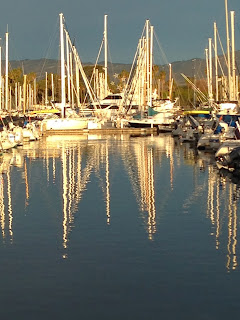 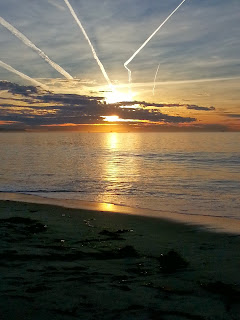 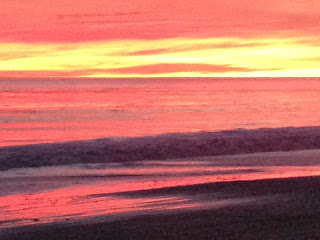 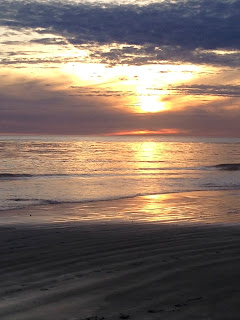