Bugs, crabs and bats .... I prefer to be underwater!

"I don't like spiders and snakes, but that ain't what it takes to love me.."  Jim Stafford lyrics


Tom's Take:    My family isn’t real big on bugs, spiders or any kind of crawly thing.  But when you go to the tropics that’s exactly what you get.  Except these critters are on steroids.  When we checked into our island house, my job was to be the first one in our bedroom to “check” for any of these wild creatures.  An  island house on Roatan is not quite what we are used to in the States. They are very nice, but usually a little more rustic and a little less, shall we say, bug proof.  After deciding who was assigned which bedrooms, I was given the instructions to “check” the room.  “Check” is translated, "seek out and destroy anything that might make me scream".  In , I am known to be very brave and efficient at this task.  There isn’t a grasshopper, moth, spider or bee that hasn't felt my wrath.  My wife and daughters have been well protected.
I checked the room out and all looked safe to me but I soon discovered --  night time is when they come out to party.  Our first night turned out to be interesting.  We were basically in a jungle on the edge of the ocean.  All the sounds of a jungle can really enhance your dreams, provided you can get to sleep.  There were almond trees over the top of our tin roof dropping almonds all night long - "THUNK, THUNK, THUNK".  Fruit bats the size of small eagles landed on the walls and eves of our island house, squeaking and fluttering as they chased insects.  All this noise, coupled with the urge to get up to use the bathroom from the several Saliva Vida’s (local Beer), kept you from what should have been a peaceful nights sleep in paradise.  I can get used to the sounds, but my wife can hear a caterpillar peeing on a marshmallow three blocks away, and if can’t sleep Tom won’t get to sleep.  I was periodically awakened by her asking “did you hear that”?  I was asleep, what do you think the answer was?
We went out to dinner most nights and would come back after dark, which was another experience in and of itself.  Crabs come out at night for their own type of party and believe me, they are everywhere! It is very dark at night (no streetlights here) and our house was on stilts because of its proximity to the beach, requiring climbing a flight of stairs to get to the rooms.  There were often so many crabs partying on the beach that it looked like the ground was moving and it was difficult to cross from the car door to the stairs.   My job was to blaze a trail to the steps.  In other words, clear a path and chase away the crabs so the rest of the gang could dash to the stairs and not land on a crab in the process!  Some of those crabs had an attitude. They would square up with you on their hind legs with their claws out -- If I had been packing they wouldn’t have been so tough!  I'll admit - a few of them were quite intimidating and I found myself giving them an extra wide berth.
Eventually we would get up the stairs and after all the laughter and commotion, we would settle down to relax and watch Gecko TV (translated:  watch Geckos eat bugs around the porch light).  This was great entertainment - if you haven't tried it, I suggest you give it a whirl next time you're in the tropics!  I remember one particular evening.  We headed into our rooms to get ready for bed and went into the bathroom before I had the chance to "check" it out.  Turns out, there was a cockroach in our shower that you could have put a saddle on.  After the mild heart attack I suffered from ’s "quiet and calm" discovery of this lovely insect,  I went into the shower to take care of this critter.  ’s discovery of this guy also alerted Jim and Jan's daughter, Beth.  Let me just say it -- this girl is the bravest woman I know.  She came into our room and offered to take this bug OUT.  My back had been bothering me (well, kind of, but okay -- not really. That bug was BIG), so I accepted her assistance.  She had a butter knife in hand and came into the bathroom with me.  I warned her this was no ordinary cockroach, but she wasn’t afraid. She pulled back the shower curtain and just like in the Hitchcock movie Psycho she went after this cockroach with her butter knife.  Eeeee Eeee Eeee.  She kind of scared me. But the bathroom was safe, and it was comforting to know she was nearby if necessary.
On this particular trip we had more fun and more unusual experiences but we created some of the best memories we'll ever have.  I wouldn’t have changed a thing.   Except I would have done more diving.  But that is true for all our trips. 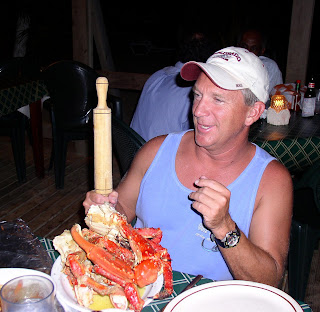 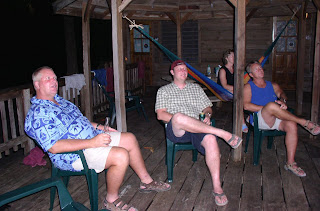 Travel Tip:  Pack Bounce dryer sheets in your suitcase and slide them into your bed at night.  Bugs are detracted by their smell and will stay clear of them!
Posted by Sandy at 7:49 AM No comments:

"People who think too much before they act don't act too much"   Jimmy Buffet
Tom is a fanatical scuba diver.  He instructs SCUBA part time and lives, eats and breathes it the rest of the time.  Our friends Jim and Jan are great divers too.  I, of course, am not.  But - I love white sand and I am always ready to hold down the beach with a margarita and a good book while the clan is diving.  We're very compatible this way!
Jim and Jan told us about this wonderful dive trip they had recently won at a SCUBA trade show event.  They went to the of , and they fell in love with its charm, simplicity and gorgeous natural reef.  We were having dinner together and sharing the pictures and stories of their adventure when suddenly Jim asked, "Would you be interested in buying property on that island?"  Tom and I looked at each other and said, "Sure, why not?"  We had no idea what that would entail and thus - the adventures began!
We invited our grown children to come along, bought airplane tickets, booked an "island house" through VRBO, found a realtor on the island that hailed from - and on August 7, 2004 we flew to to start our adventure.
So imagine this - there are eight of us on this trip and at least 16 bags of luggage, not to mention carry on items.  We had pre-arranged for a van rental at the airport and when the van showed up we all were a bit surprised.  It was almost like reliving a 60's experience with the "love van" - but no flowers, just a scuffed up white exterior and green vinyl row seating.  But it was big enough (barely) to fit all of us and our luggage and with some creative packing by Tom, Jim and Orlando, the baggage attendant at the airport, we managed to squeeze everyone in and off we went to find the island house!  As we began weaving our way around the one narrow paved road on the island - dodging bicyclists, vehicles, pedestrians and dogs, we quickly discovered that our KIA van had a very noisy engine that squealed loudly with every shift and turn, causing everyone around us to stare and laugh as we drove by.  Of course, they could have been laughing at our piles of luggage atop the van, the arms and heads of all of us hanging out the windows of the van as we strained to see everything around us, and just the sheer absurdity of seeing eight American jet-lagged adults navigating through their narrow streets with no clue of where we really going.  Fortunately, we were laughing too and my daughter brightly came up with a new name for our van - the SQUIA (squeaky KIA).  The name stuck and the adventures continued and by the end of the week the entire island knew who we were, why we were there and most certainly, they always heard us coming!
We finally found the island house (trust me - no easy feat!).  The directions we had been given said simply, "leave the airport and head towards , turn at the cemetery and follow the dirt road to the ocean.  The house in on the left."   Sounds easy enough, right?  After all, there's only one paved road on the island so how can you get lost?  What we didn't realize is that there's more than one cemetery and most certainly, more than one dirt road that leads to the ocean with a house on the left!
We tumbled out of the van - we were a big, sweaty heap by that time and the adventure was starting to wear a bit thin, but we were here and had found the house - it was time to unpack!  The house was right on the ocean as the owner had said and the views were beautiful.  What the owner didn't say, however, was that there was no air conditioning and we were visiting the island during the hottest August on record.  The house turned out to be four bedrooms, each with a rustic bath, surrounding an open covered deck and a fifth room that served as the kitchen.  All living took place on the covered deck, facing the ocean.  Since it was so hot, that was okay and we quickly delegated bedrooms.  We couldn't wait to get into that ocean and cool off!  Steve, our realtor, was waiting for us when we arrived and we liked him immediately.  He told us of several properties he had lined up for us to see and we agreed to meet at 9 the next morning.
Let the fun begin! 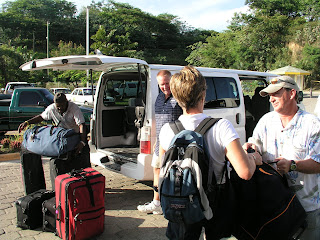 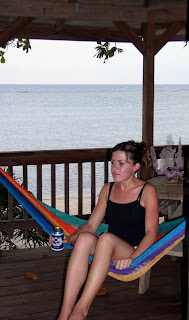 Travel Tip:  VRBO (Vacation Rentals by Owner) is a great website that lists vacation properties around the world.
Posted by Sandy at 9:25 AM No comments: