Time flies when we're having fun....and I can't believe I've neglected my blog for two months!  We had such an amazing time in Spain and then came home and got caught up in the world of reality and needless to say, I've had a hard time getting back to normal (whatever that is!).

Everyone I've talked to about my trip to Spain has asked about the Vaughantown experience and I wish I could capture it for you in words, but I can't.  Not entirely.  So much of what we experienced there was feelings - connections with others, Spaniards and Anglos, and the start of beautiful global friendships and for me personally, it was a life changing event.  My local newspaper asked me to contribute an article about my experiences, so here it is.  It's a bit lengthy, but I hope you enjoy and get a flavor for the time Tom and I spent in Spain.


“What does it mean to say, ‘you’re in the doghouse’,” Pilar asked as we walked along a beautiful mountain trail in .  I thought about her question, frowning as I considered how to explain this American phrase to the lovely Spanish woman from .  I was in participating in a volunteer English language immersion program for Spanish adults with an organization called Vaughantown.  The program partners native English speaking adults, (referred to as Anglos), from around the globe, with Spaniards seeking to improve their English language skills.  The Anglo volunteers travel to Spain at their own expense, and spend six days in a remote location with the Spaniards, many of whom are there for professional development, speaking and engaging together all in English.  Many people have asked if I speak Spanish – the answer is no, not really.  But that’s the beauty of Vaughantown - the only rules of the week are, “No Spanish may be spoken”, and “have fun and learn in English”.   The goal of the program is to help the Spaniards improve their English, which in turn will benefit them in their personal and professional lives.


My husband, Tom, and I learned of this program last summer and applied to participate. We were accepted to attend a session in May, 2013 and we began planning our Spanish adventure -- we would participate in Vaughantown for one week and tour the next week.  We flew to and met up with our group on a warm Sunday morning.  There were 17 Anglos, including us, and we hailed from , , , , and the .  Some of the Anglos were repeat volunteers, having enjoyed their original experiences so much.  The 13 Spaniards were from all across and the group included Lawyers, Engineers, Business Directors and University Professors, all attending to expand their careers  We traveled two hours by bus to a Sheraton hotel that was attached to a 700 year old functioning monastery.  The hotel grounds border a natural park, ringed by snow capped mountains and filled with winding nature trails that lead to ponds, rivers, meadows and the rural village of Rascafria, two miles away.  This beautiful but remote location would be our base for the week and we would spend each day immersed with one another; talking, eating, working, and experiencing life together, all in the English language.  We boarded the bus as strangers, but we ended the week as tight friends who will never forget one another or the time we spent in the beautiful Spanish mountains.


Our days were full, beginning with a wakeup call at 8:15 and ending with dinner at 9:00 pm.  We ate all of our meals together, and the tables in the large dining room were set for four – two Anglos and two Spaniards at each.  We were asked to “mix it up” during the week, sitting with new people at each meal.  Not only did this allow us to get to know one another better, it also allowed the Spaniards the opportunity to hear a variety of English accents and terms, helping them to become more proficient at speaking English.  During our first couple of meals together, the conversations were fairly formal as we became acquainted with one another and the Spaniards practiced their English, but as the week progressed we all became friends and soon meals were a noisy and busy affair, all of us eating, chatting and laughing amiably.  After breakfast we would receive our schedule for the day.  Anglos and Spaniards were partnered for 1:1 conversations and pairs rotated every hour.  Lunch and siesta was from 2:00-5:00, and more 1:1’s or organized activities occurred between 5:00-8:50, ending with dinner followed by free time.


The 1:1 times, when a Spaniard and Anglo were paired together, created a unique learning opportunity for the Spanish, with the goal of becoming comfortable speaking English in a casual and relaxed environment.  This was my favorite activity – getting to spend time truly getting to know my Spanish partner.  The first days we were new to each other and sometimes unsure of what to discuss but as we walked on the lovely forest paths or sat in the hotel courtyard sipping coffee, we would each become more relaxed and soon, we were comfortably discussing a wide variety of topics.  Evening activities were designed to stretch the English comfort levels of the Spanish and often included organized skits or plays.  We all learned to overcome shyness at performing in front of groups and we often ended the evening practically in tears, laughing hard at each other’s antics.


As the week progressed I learned more and more about each Spaniard’s life -- their interests, families, jobs and the culture of their beautiful country.  My respect for the Spanish participants and my fellow Anglos grew immensely through our time together.  The hours were long and difficult, but the Spaniards were dedicated to learning and as I watched their confidence grow and English improve, I was glad to be a part of helping them achieve their personal and professional goals.   On the final day during the closing ceremonies, one Spaniard summed up the experience for all of us.  He stood before the group and, speaking genuinely from his heart, he addressed the Anglos.  “Thank you for doing this.  I don’t understand why you gave up your time or came so far to help us learn, but I am glad that you did and we love you for it."


When Vaughantown was over, Tom and I spent another week touring southern but we never stopped talking about the things that had happened in Rascafria and our new found friends.  It was one of the most unique and rewarding vacations we’ve ever taken and we are already planning for when we can return to and volunteer with Vaughantown again. 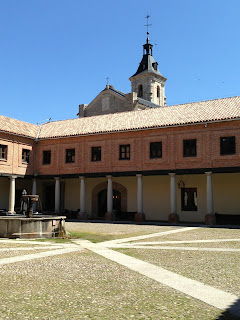 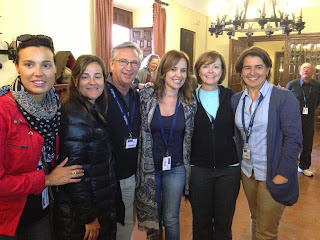 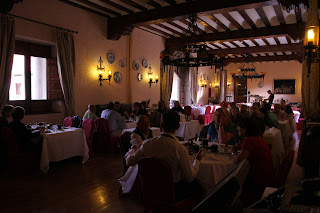